We were there to fulfill my end of the Brewer for a Day end of a bet from last year, but truly it was about brewing a collaborative Maya-inspired beer for the Museum’s annual Science on Tap event. Patrick Crawford, cofounder of the Denver Beer Co., had already fulfilled his end of the deal, joining the ranks of Michele and me as a Curator for a Day, so it was the scientists’ turn to take on the role of brew master.

It was already sweltering by the time we arrived at 10 a.m. at the brewery on Platte Street. I had ridden my bike, and the commute left me yearning for cool air conditioning and a frosty brew. But I got neither. Breweries are not the coolest of places (temperature, of course), and Patrick reminded us that there was work to be done if we were going to get this beer brewed.

First item on the docket was prepping our first ingredients for the mash: barley, corn, and sweet potatoes. Patrick used a keg to boil the sweet potatoes earlier that morning and gave us the task of turning it to mush. At first, we began cutting the keg-roasted potatoes into chunks, but being the scientists that we are (brains before brawn my friends!), we improvised and created a new, more-efficient mushing method. We dumped the 60 pounds of sweet potatoes into a 50-gallon barrel. Michele spied the metal paddle used to stir the mash and repurposed it to crush the sweet potatoes. Concurrently, I put my guns to the test and lugged 55-pound bags of barley to the mill. Between the two of us it was quite the workout—and the triple digit temperatures didn’t help matters—but we were quickly rewarded with the luscious aroma of warm sweet potatoes and the sweet smell of freshly milled malted barley.

Next on the brew agenda: spice shopping. Charlie Berger, Patrick’s partner in crime and cofounder of the brewery, took Michele and me for a stroll down the block to see his spice guru, Matt Wallington, at the Savory Spice Shop. We were there to select chile peppers, a key ingredient used by the Maya. After very little debate, we all agreed on a quarter-pound of dried whole de arbol chiles, a hot pepper with an earthy aroma and just the right kick to complement the subtle flavors of our brew, including honey and roasted cacao nibs.

When we got back to the brewery, Patrick was working to transfer the liquor from the mash to the brew kettle for the boil. We selected a combo of fairly mild hops, again something to balance sweet but not overwhelm the flavor profile we are shooting for in this brew. We stopped for a lunch break during the boil, and afterward Michele earned her brewing stripes by cleaning out the mash tun. Everybody’s got to do it at least once! Later that afternoon we were joined by supporters of the Museum’s Young Professionals group to pitch the yeast and add in the final ingredients: chile peppers, cacao nibs, and honey.

It may seem like an unusual beer combination, but these ingredients, corn, honey, sweet potatoes, chilies, and cacao were selected after months of careful research. Earlier this year, we partnered with Metro State University to test ancient vessels that we believe held some kind of fermented beverage. We used a combination of techniques, including archaeochemistry—the chemical analysis of archaeological specimens—to examine the molecules that remain in ancient pottery from the Museum’s anthropology collections. Typically, archaeochemical techniques involve grinding the pottery specimen and then testing the powder for residue molecules. While effective, this is destructive and prevents future study of the object. Using sonication and gas chromatography, we set out to develop and test new noninvasive techniques that are just as successful at finding and identifying molecule residue. As part of this methodology testing, we found ourselves with a molecular “hit” from one of our samples, beeswax.

Comparative analysis with purchased beeswax showed an identical molecular signature. Sure enough, we had ourselves a discovery on our hands! While we are continuing to pursue method testing and following up on the beeswax lead, based on this scientific evidence, we selected honey to be the primary flavor for the beer experiment. From there, we researched other geographically and culturally accurate ingredients, including corn, chile peppers, chocolate, balché tree bark, agave, and flowers such as morning glories, to name a few. From these, we built a flavor profile to balance the sweetness of the honey, which is what lead to the corn, sweet potato, chocolate, and chile combination described above. 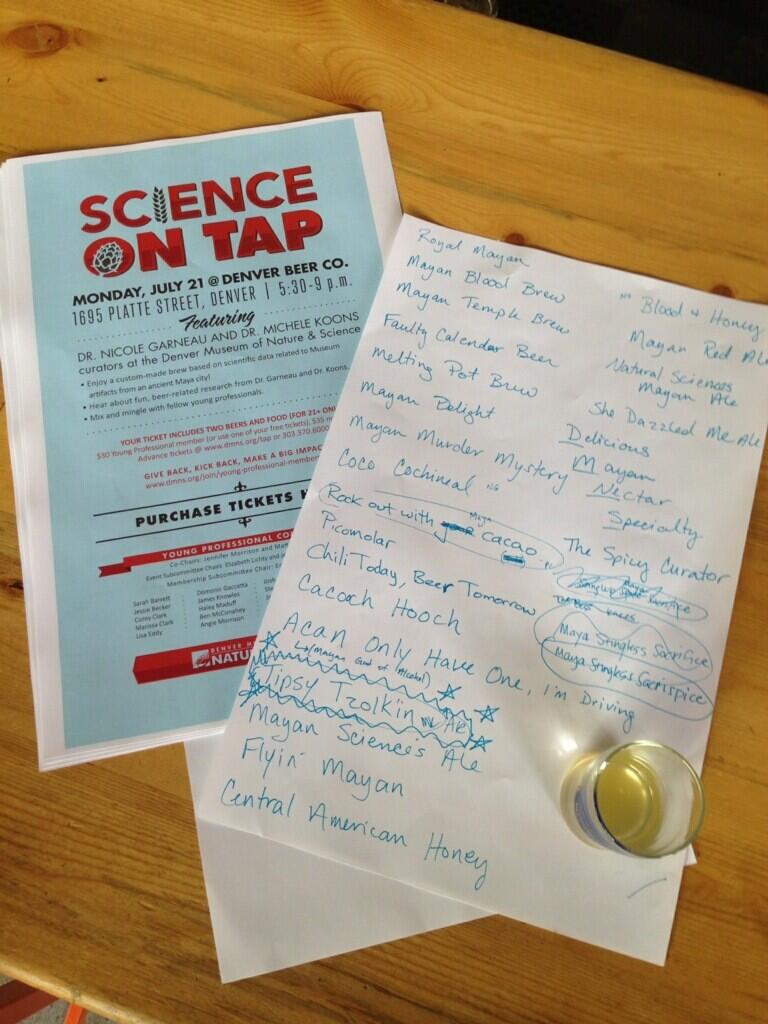 Not only is this brew project a unique way to bring science to life and join the past to the present, but the successful results of our noninvasive technique could help change some of the approaches used in the field of archaeochemistry, one ancient vessel at a time.

In the meantime, we invite you to be the first to try our beer! It is Batch 500 for Denver Beer Co., and thanks to our Young Professionals group and a long list of candidate names, the team ceremoniously named it the Tipsy Tzolk’in in honor of the Maya ritual calendar. It will be served at Science on Tap on July 21 at Denver Beer Co and during Summer Nights @ the Museum on Friday, August 8 (www.dmns.org/summernights).

Just Because I Am a Scientist, That Doesn’t Mean I Own Science

Just a Spoonful of Sugar

A Taste of Life, Right to Your Inbox